Menu
Log in
Welcome to the Sacred Heart Primary School! 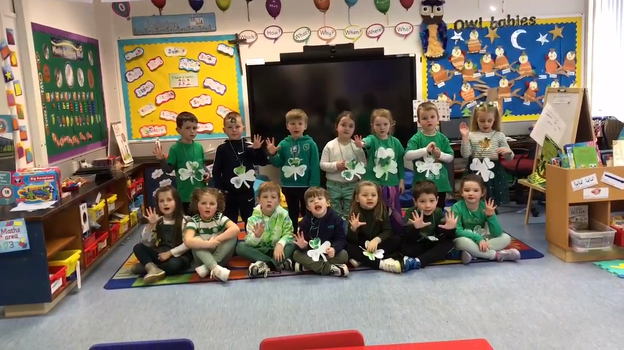 The children were fantastic at weighing this week in Numeracy. They weighed and measured everyday objects in class and tried to balance them with cubes.
We are continuing blending words and using them in the context of simple sentences. In the world around us we did a wind experiment which the children can tell you all about. We are currently setting up our new jungle roleplay area, have a look at the children’s play based learning photos.

We’re going on a bear hunt

The children have moved their story of we’re going on a bear hunt and postman bear this week. We engaged in writing for a wide range of purposes e.g. labelling and writing birthday cards and simple sentences. The children continued their work on addition and were introduced to solid shapes: cylinder cone cube cuboid sphere. During play we enjoyed making large bear hunt posters and had new little red riding hood and bear hunt acting trays for taking on roles. In world around us, we explored the wind and its effects on things around us in Dundrum. 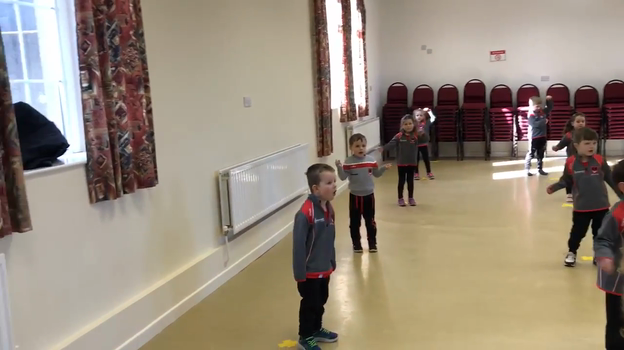 Our recent blending every day during literacy has had a massive impact on the children’s confidence at blending, making words and using new sounds in context. The pictures show how amazing we are getting at writing and making CVC words. Even during play the children ask for literacy challenges, as they want to ‘be the teacher’ during their playtime. Fantastic work and learning is happening during play. The children also continued adding this week and recorded their own number sentences. We used non fiction books to find information. Ask your child to tell you what new information they found out about bears at home :)After last weeks successfully story telling of the little red hen the children ask for a red hen tuff tray to play in, have a look at the photos. 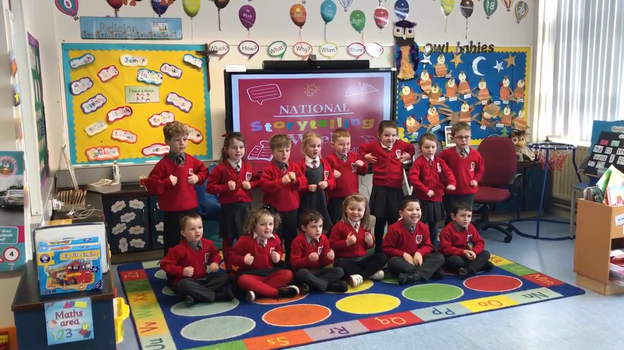 Primary One meet the chicks

Busy children in Primary One

Goldilocks and the 3 bears

Our sound of the week this was ‘b’. We made lots of new words such as bat bus bin bell. In Literacy we continued blending 3 letter words and thoroughly enjoyed our stories ‘Floppy Floppy’ and ‘Goldilocks and the three bears’. In works around us we explored movement and energy with cars and ramps outside. We discovered a new app on the iPads and played it with partners, ‘Coding Safari’. During play, we made character lollipop sticks, used Lego to create chairs and beds for baby bear, used creative bears using natural resources and played new roll the dice games to name a few activities.

Our story this week was “Whatever next”. The children used it as stimulus to paint little bears and make rockets in the creative area. We also had lots of props for acting out this story. Another story we read was ‘I can” which was great for blending words e.g. I can mop I can hop I can pat I can sit. Out new sound of the week was ‘u’. In PE we played basketball and began our new dance lessons. In Numeracy, we focused on combining 2 groups of objects together and learnt the language of addition. Have a look at how busy and productive the children are during play. We introduced a digital library during play which the children loved.

We had such a busy first few weeks back at school. Our new sound was 'k' and you can see from our photos we have been using all of our initial sounds in our reading and writing, and are using the skill of blending every day (see seesaw for blending video). We had a litter pick and learnt new bouncing skills during PE aswell as controlling the call with our feet. In maths we focussed on accurate counting, we are introducing numbers 11-12 and we found 1 more than and 1 less than certain numbers to 10 practically and on a numberline. Our new topic is 'bears' and our new roleplay is the 3 bears cottage which the children have absolutely loved. Enjoy the photos and maybe your child can tell you all about our week!

A special week with a special visitor!

Have a look at our photos from our shared education winter themed play based learning. The children from knockevin also joined in with similar experiences and we shared our videos and photos with each other via zoom.

The children loved using the sphero play app on the Ipads to code the sphero balls. Our new sounds this week was 'd'. We used the internet and powerpoint to find out facts about penguins and our Literacy book was 'Owl babies'. We are focussing daily on using new sounds for a purpose e.g. 'S' for 'Sarah', 'm' for 'mum', 'p' for 'pole'.

Our number of the week was number 9. We continued work on finding 1 more than practically than a given number and began to use numberlines also. We made shape patterns using paint and paper shapes e.g. triangle circle triangle circle. Lots of our photos also show the children's enjoyment and interest during play based learning.

The children had a very busy engaging in antibullying and road safety activities. They have now learnt satpinmo sounds. In Literacy we focussed on the stories 'the little red hen' and the skill of 'rhyming'. In Maths we were finding 1 more than a iven number to 10 using numberlines and practical objects. We also engaged in practical activities linked to height and measurement. We learnt how to use sphero balls and explored how to code the spheros using ipad remote controls.

Our Visit to the castle

This week we also joined in with a shared education relaxation lesson with boys and girls from Knockevin special school.

The children had a very busy week! They have now learnt s,a,t,p and are practicing matching the sounds to objects e.g. p for pirate. We practice our names everyday and the stories we enjoyed this week were 'Fetch' and 'The smartest giant in town'. In Numeracy, we focussed on accuarate counting to 6 and 10 and found piles that were more and less. We also started work on shape, finding them in our classroom and playing shape games.

In world around us we explred our senses- each table represented hearing, sight, smell, touch and taste and the children exploring all in a funfilled afternoon. In PE we practiced ball skills- rolling, throwing and catching with control. Our photos also show a range of play based learning activities!

A wonderful week in Primary One

The children have now learnt 2 sounds 's' and 'a' in phonics and are finding objects with these sounds. In lIteracy our books were 'The Haircut' and 'Percy the Park keeper'. We are beginning to form letters by copying visual aids, and we were all able to sequence 5 pictures in order from a familiar story. In maths we focussed on counting accurately, missing numbers to 5 and sorting activities. In World Around Us we made a delicious fruit salad. The children were shown how to use knives to cut fruits and did this independently and sharing with partners, they were all able to do this independently.

In play, the children made Autumn pictures, catperillar finger paints, played new table top games and explained the rules and drew around shapes on whiteboards. The new construction and small world areas of a building site and a city were highlights of play this week.

The children loved their story of the week 'The very hungry caterpillar'. They retold it with puppets and using an acting tray, created art, sequenced the story and had a go at drawing some pictures from the story. We spent some time during world around us celebrating recycling week and European language day. Have a look at some of our play based learning activities in our photos this week.

Finally, we learnt our very first sound in P1, 's'. Maybe the children can share their new 's' the snake is in the grass song at home!

A busy week in P1

The children had a wonderful week. In Maths we are learning to count to 5 and some children are working between 6-10. We are thinking about the importance of counting in a line and always checking our counting by touching the objects and making sure we have the correct number. In Literacy, we focussed on the books 'at school' and 'Olivers vegetables'. We are learning to put meaning to marks made, distinguish between writing and drawing, retell a simple story in our own words, and writing our name. We had lots of fun activities during play, focussing on making patterns, learning the rules of table top games, using resources to make things in the creative area and being introduced to sand, water and the role-play areas. We also had 2 outdoor play sessions which were very enjoyable. In world around us we are learning all about healthy and unhealthy foods.

Our visit to the beach and play in Primary One

A very warm welcome to our new Primary One Class!

Unfortunately not the ones with chocolate chips.

Some cookies are necessary in order to make this website function correctly. These are set by default and whilst you can block or delete them by changing your browser settings, some functionality such as being able to log in to the website will not work if you do this. The necessary cookies set on this website are as follows:

Cookies that are not necessary to make the website work, but which enable additional functionality, can also be set. By default these cookies are disabled, but you can choose to enable them below: